Now Playing -
Life Gets Better by Booth and the Bad Angel

Well, it was right around a year ago that we started packing in earnest for what we thought was to be our triumphant trip to Washington to run a Motel. This year, we are once again packing, and again, in anticipation of a potential move West. Of course, the main reason we're doing it right now is so that my mom and brother can come and move in with us, living in the basement.... Urgh. We want to do this right though, not just shove everything in boxes, in the hopes that they'll then be loaded onto a moving truck when I get a transfer. So far the library is packed and mostly moved and the dog's kennels, where they stay when we're at work have been moved upstairs. Still a lot of work ahead of us, to say nothing of the integration afterwards! 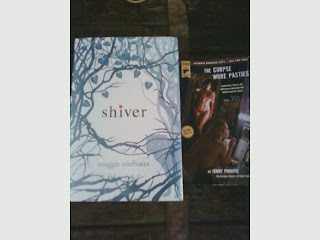 I read two great books this time around, two very different books too. One was about a girl in love with a boy that becomes a wolf when he gets cold, and the other was about a dog that becomes a detective when a girl goes cold. Lots of fun!

Beneath the gorgeous cover and design of the book lurks an even more magnificent beast, lyrical and poetic.

Virtually drips with a forbidden and incomprehensible love that leaves you longing for that first taste again.

Shiver has a unique take on Werewolves that is pure fairy tale, yet seems more realistic than many stories.

Should be more popular than Twilight, or any other book of that ilk.

For some reason, the subtle blue ink and the simple chapter/temperature headings really rock my socks. It's amazing the difference little touches like that make.

(Maggie is also a talented artist and musician, I strongly suggest that everyone visit her website, watch the teaser for Shiver and fall in love with it the way I did!)

Not your grandpappy's crime novel, though you can bet he wishes he had something so titillating and funny to hide in the basement.

Written by the self-appointed "Burlesque Mayor of New York City," Porkpie comes off so appealing and hilarious that the reader wants to quit their day job and start a career as one of his steamer trunk members. (I assume he has a steamer trunk instead of a cabinet...)

Full of colorful and naughty characters, many so good that they have to be true.

This is crime for the Rockabilly Geekcore set, for anyone with tats, piercings, comic books and an Apple computer. For anyone that ever put on a trenchcoat and had to decide between Marlowe and Gibson when it comes time to accessorize. Highly Recommended!

(For more info on the Hard Case Crime series of books, check out their website. They also offer a mail order book club that is very, very cool.)

Progress at long last! I finally found my new beginning for The Whispering Ferns. After deciding months ago that it needed to have a snappier opening, I cut the first three chapters (roughly) starting the book as Smith is on the plane on the way out to Washington state to live with his aunt and uncle. The problem was where to start it. I'd considered starting it with one of his dreams, but it's cliche. The last thing I want to do is scare someone off for starting a book with a dream. Finally, I found a place that I like. I need to re-jigger it a bit, but it should let me get a bit of backstory in easily and sound pretty strong.

Now if I can find time to really dive into it....

"My dad's a famous explorer, you know. Well, kind of famous anyway."

From - "The Whispering Ferns" (WIP)

Did you ever hear back from the New York literary contest? Haven't heard....